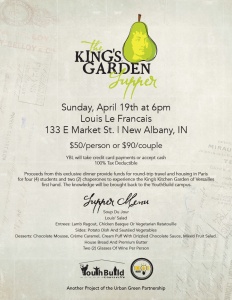 Take a look back at the 2014 apprentice program .

LiQuiyion Mitchell and Sierra Preston, participants in YouthBuild Louisville, are two smart, young adults trying to become better leaders. IDEASUrbanGreen is a project that is allowed LiQuiyion and Sierra the chance to lead by providing art and sustainability apprenticeships in Versailles, France —  supporting these young adults, and others like them, in becoming the next generation of green entrepreneurs and creative leaders.

In the summer of 2014, with financial support from an online crowd funding campaign, LiQuiyion and Sierra had the chance to learn about urban agriculture food production and art at the Garden of Versailles. LiQuiyion and Sierra (and two mentors) spent two weeks with Antoine Jacobsohn, the Director of the Potager du Roi, or “King’s Garden” – the kitchen garden started by King Louis XIV.

Upon finishing the two-week intensive training, the young leaders returned with knowledge (and actual seeds from Versailles) to help an art and science food garden at YouthBuild Louisville’s campus in the historic Smoketown neighborhood. Literally, reconnecting Louisville to the royal court of France that gives the city its name.

Their resulting work (co-designed with NYC landscape architect Christian Duvernois) is currently in the process of being realized on the YouthBuild Louisville campus in Smoketown.

YouthBuild Louisville has emerged as a cornerstone in the Smoketown transformation because we are committed to rebuilding lives. YouthBuild Louisville is a education, leadership and job-training program for young adults between the ages of 16-24 who have dropped out of high school and are underemployed. YouthBuild participants attain their GED while training in carpentry, green careers, and healthcare.

An artist-developed/entrepreneur-focused contemporary art chamber of commerce pioneering new ways for artists, entrepreneurs and other creatives to effect positive social and economic change in Louisville, Kentucky.

Smoketown is located in the heart of urban Louisville and connects economic, historical, cultural, and higher learning institutions. This neighborhood, settled by freed slaves after the Civil War, has a history of resiliency and prosperity. However, economic downturn impacted the neighborhood significantly, which has led to urban blight and lack of resources

Right now, Smoketown is in the midst of transformation. Louisville Metro Housing Authority’s reinvestment in the neighborhood has created the momentum and urgency for the Smoketown community and its partners to heal this neighborhood.